Darlington Quakers have been based at their current site on Skinnergate since 1678 when it was bought for £35.  Previous to this, meetings were held in private houses in Darlington, Cockerton and Blackwell. 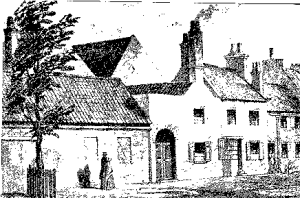 The Friends Meeting House on Skinnergate, 1760

By 1760, various additions to the land and buildings had been made.  This etching shows a small building to the left, which was used for mid-week meetings and, to the right, cottages which were used as almshouses.  Behind these street-front buildings were a stable for visiting Friends' horses and two meeting houses - men's to the left and women's to the right - the gables of which are visible on the etching.  Entry from the street was through a wrought iron gate.

In 1839-40, the old Skinnergate buildings were demolished and the present frontage built, probably to the design of Joshua Sparks, a Quaker architect. This new block consisted of lobbies or committee rooms on the ground floor, with a library space and classrooms above.  Nowadays, this block is the Library and Institute rooms, which are used by various community groups for meetings and activities such as creative writing and crafts. The Library, which stands on the site of the old "small meeting house" is, used by Quakers for their mid-week meetings, so today's Friends sit in the same spot as their predecessors did over 250 years ago.

In 1845-47, the two meeting houses behind the front block were extended and joined together to make one large building, with the meeting rooms separated by large moveable shutters.  These shutters could be lowered for the separate business meetings of men and women but raised for mixed meetings for worship.  The remains of this shutter system are still in place today, though the room on the left (which was the men's meeting room) is now the one used for Sunday meetings for worship and the room to the right is The Elm Tree room, used by larger community groups for activities such as dancing, yoga and a children's playgroup.  The Elm Tree room was named after a Quaker mission hall which had previously stood on Rise Carr.

Another feature from the same time which remains in place to this day, is the beautiful "ministers gallery" - a raised section of seating in the Meeting Room with a curved sounding board above it. 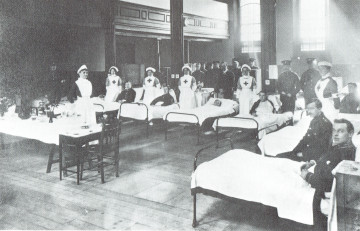 In late 1914, the Meeting House was used as a hospital for wounded Belgian soldiers.  This photograph was taken from what is now the Elm Tree room and shows the shutters between the two meeting rooms raised.

Various alterations and extensions were made over the years to accommodate growing numbers of attenders and Quaker schools for both adults and children. By the 1960s however, numbers had dwindled and some of the Quaker buildings in Skinnergate were either demolished (for example to make way for the current car park) or let out to businesses, such as the Footprints bookshop and the Butterwick Hospice charity shop.

The Meeting House was listed as a Grade II* building of special architectural or historic interest in 1952 as, eventually, were a number of other buildings and features around the Meeting House, including the iconic red telephone box to the left of the front door.

More of the Meeting House's history can be found here and information about the burial ground here. 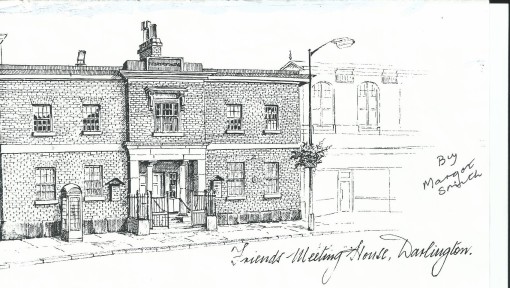 A sketch of the Friends Meeting House by Margot Smith